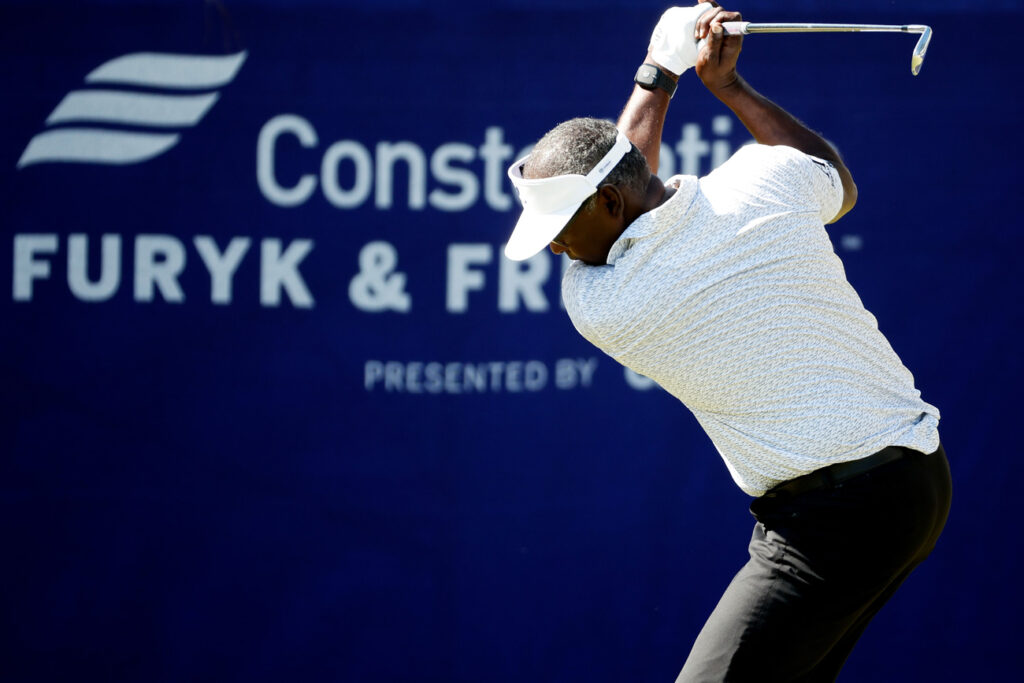 A milestone in swing analysis occurred last week at the PGA TOUR Champions’ Constellation Furyk and Friends as Vijay Singh competed with deWiz’s innovative wearable tech in all three tournament rounds. deWiz’s Data Science team has led post-round analysis of Singh’s swing data, unveiling several preliminary findings on how his swing varied or didn’t when comparing data across the driving range, practice rounds, and in competition. Additionally, precise analysis of good and bad shots is underway, revealing insight into what elements of Singh’s swing contributed to both his successes and misses in competition. Our preliminary analysis report shows how Singh’s swing was faster, shorter, and less over-the-top in competition compared to his range session prior to this round. For more information on deWiz, visit www.deWizGolf.com.

“Our groundbreaking efforts to analyze golf swings through deWiz’s patented technology took a huge leap forward as we bridged the technology gap between the driving range and first tee last weekend. Singh’s swing data matched some of our preliminary findings with amateurs that fundamentally golfers’ swings are different on the driving range compared to in competition,” said Markus Westerberg, Co-Founder and Chief Product Officer, deWiz Golf. “A common frustration for golfers is hitting it great on the range and then not knowing what happened on the course. With deWiz, Vijay knows precisely what happened to his swing inside the ropes last week and the development of our ‘tournament’ mode could prove to be a distinct competitive edge for golfers who utilize deWiz’s capabilities in competition.”

“To our knowledge, this is the first time a player has gotten comprehensive and exact swing data collected from a global professional tournament with the ease of a wearable technology,” said Laszlo Varga, CEO, deWiz Golf. “To call this a groundbreaking event for swing analysis may prove to be an understatement, as now golfers like Vijay and Notah who are using deWiz will not have to rely on guesswork or feel to understand precisely what happen within their swing during competition.”

This ‘tournament’ mode is still under development by deWiz Golf and was used within the rules of golf and with PGA TOUR rules official approval. For the ‘tournament’ mode, the technology is in a ‘stealth’ mode where all access to data and feedback occurs after the round. Notah Begay is expected to wear deWiz at this week’s SAS Championship, the PGA TOUR Champions final regular season event, and other deWiz global ambassadors and avid deWiz users on various professional tours have the opportunity to trial our ‘tournament’ mode swing analysis services.

RANGE vs. COURSE: In general, Singh’s swing was faster, shorter, and less over-the-top in competition compared to his range session prior to this round.

deWiz’s Data Science team also tracked advanced data currently only available to deWiz Coaches – including initial downward direction – which showed Singh was dropping his hands more in transition on several shots deemed ‘misses.’ The team also identified that Singh was slightly faster on his backswing on several ‘misses’ compared to his good shots.

Lastly, the Data Science team reported how Singh maintained consistency with his length of backswing and tempo under pressure significantly better than previous club golfer data captured. deWiz’s research with avid golfers using deWiz on-course has shown a larger drop in length of backswing and changes in tempo. Singh averaged a LoB that was 1.3 inches shorter between course and range, a 2% difference. However, deWiz typically measures amateur golfers with a 6-inch difference or 10% change of their LoB on the course compared to the range.

“While this is preliminary findings after our first test of deWiz at a professional men’s event, we are excited to continue to provide insights to our global ambassadors or any professional golfer looking to better understand his or her swing when it matters most – inside the ropes. Other technology does an amazing job at delivering swing data on impact and ball flight, but what I think is most significant for deWiz is our data provides comprehensive insight of the actual swing, which is the cause vs. the effect of a golf shot. And we can deliver that data in real-time on the range or as a post-round analysis for competition,” said Westerberg.

DEWIZ GOLF, HOW IT WORKS: Under development for more than five years, deWiz tracks the exact position of a golfer’s hands throughout the swing, providing a 3D analysis and delivering data via a user-friendly app that helps golfers more consistently hit the ball longer, straighter, and closer, as well as learn faster with deWiz’s patented Learning Stimuliâ¢. For golfers, deWiz currently measures 11 swing data points on each swing, including Transition, Length of Backswing, Backswing Plane, Max Backswing Width, Max Hand Speed, and 5 Tempo measurements, and additional advance metrics are available to teaching professionals and our elite players program. To access videos on all deWiz’s groundbreaking features, instructional webinars, and ambassador testimonials, please visit deWiz’s YouTube Channel.

BUZZWORTHY TECH: Debuting last summer, deWiz’s introduction has created a ‘buzz’ with it being described by Forbes as looking to bring a ‘jolt to the golf training aid market;’ profiled in Sweden’s leading financial media, Dagens Industri; featured within On the Mark Podcast with Mark Immelman; and showcased by Global Golf Post, Golf Monthly’s Editor’s Choice, and Business Insider. Additionally, Golf.com profiled how Vijay Singh uses deWiz to lengthen his backswing, Annika SÃ¶renstam’s uses deWiz to monitor her tempo and Yuka Saso uses deWiz to dial in her wedge game.

ABOUT DEWIZ AB: As a world leader in stimuli-based motor learning, deWiz enables people to unlock their potential and achieve their goals through groundbreaking data and technology. As a Swedish developed and produced product, deWiz Golf AB is focused on its mission to help golfers around the world increase their enjoyment of the game through innovative technology that increases their pace of learning. Developed in Malmö by co-founders Markus Westerberg (PGA Professional, Ljunghusen Golfklubb) and Christian Bergh, deWiz is available in the U.S., Canada, Europe, Australia, Japan, South Africa, and South Korea (more markets are opening regularly – visit the site for the latest updates). For more information on deWiz AB, visit dewiz.com for investor relations and corporate information. For ecommerce and more information on deWiz’s patented golf swing modifier, visit dewizgolf.com and learn more on how to consistently hit the ball longer, straighter, and closer. Download the free deWiz Golf demo app to explore its pioneering swing data via the Apple App Store or Google Play.