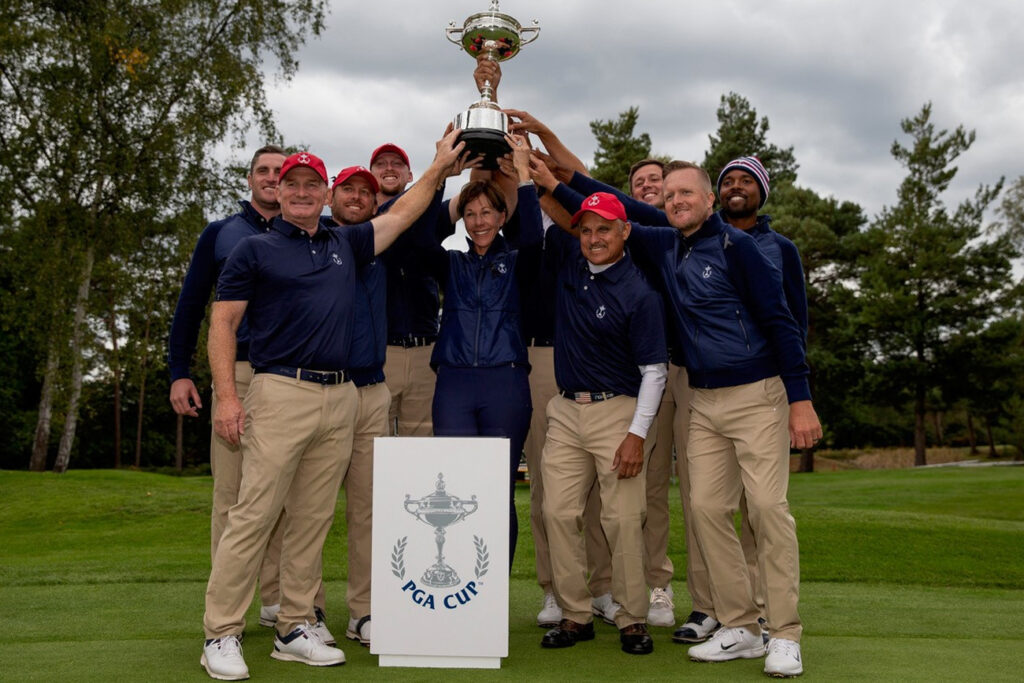 Team USA overcame a resilient Great Britain & Ireland performance to successfully defend their title across three days of incredible PGA Cup action at Foxhills Club & Resort.
The eagerly anticipated team event saw a selection of the world’s best club professionals represent the PGAs of Great Britain & Ireland (GB&I) and America as they went head to head in a Ryder Cup format for the Llandudno International Trophy.

After successfully holding the prestigious event in 2017, the Surrey resort became only the second Great Britain & Ireland venue in the PGA Cup’s 49-year history to be chosen twice, following the lead of 2006 Ryder Cup host venue, The K Club in Ireland (1992 and 2005).

The Americans got off to a flying start, opening up a three-point lead after day one, and never seemed to look back.

Day two started with an early glimpse of hope for GB&I as they rallied through with signs of a comeback in the morning, cutting the deficit to two after the fourballs, but team USA proved too strong in the foursomes as they opened the gap back up to three points as Saturday drew to a close.

Heading into the Sunday singles trailing 6.5 to 9.5 and with it all to do, GB&I needed to win seven of the final day’s ten matches to regain the title they lost in 2019 at Barton Creek Resort & Spa in Austin, Texas.

Despite a good start in several of the day’s early singles matches, the tone was set in the opening contest as GB&I’s Ashley Mansell relinquished a four-hole lead with six to play as American Michael Block recorded five birdies in the final six holes to complete a remarkable turnaround.

Although Adam Keogh, Daniel Whitby-Smith and Greig Hutcheon were able to put some blue on the board for team GB&I, defeat in a further four matches with two halved saw the United States run out comfortable 15.5 to 10.5 winners over DJ Russell’s team.

The victory is the first the US team, led by PGA of America Honorary President Suzy Whaley, has won on away soil since 2009.

More than 70 Foxhills members volunteered throughout the week to ensure the smooth-running of the competition, with everything from scorers, scoreboard holders, ball watchers, range helpers, buggy drivers for players and many more roles you’d expect at a professional tournament.

Chris Fitt, Foxhills’ director of golf and leisure, said: “I am extremely proud of the club and my colleagues for delivering another successful PGA Cup.

“Using everything we learned from 2017, we worked hard to make the event bigger and better for the players, officials, partners, spouses and our members. It’s been a real honour to hear nothing but praise, recognising our golf courses and hospitality as world class.

“To hold an event of the PGA Cup’s gravitas and tradition with such ease is a true testament to the outstanding team and facilities we have here at Foxhills and it’s rewarding to see all the preparation, planning, hard work and dedication from our greenkeeping, golf and event teams pay off.

“Finally, congratulations to the United States on their deserved victory after three days of exceptional golf.”

The PGA Cup was again played on Foxhills’ revered Longcross course. Surrounded by Scots pine, beech and silver birch, it is renowned as one of Surrey’s top tree-lined layouts and consistently features in UK top 100 rankings.

Combining parkland and heathland-style holes, it provided a thrilling challenge for the professionals, demanding precision to plot their way around with several eye-catching elevated tees set amongst stunning Surrey countryside.

The full final leaderboard can be viewed here:

Highlights from each day of the tournament can be found at the links below: